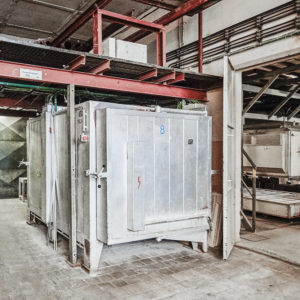 The tradition of the mold melted glass studio in Pelechov (kiln cast glass technology), Czech Republic, dates to the 1950´s, when it was established by world famous czech glass artists Stanislav Libenský and Jaroslava Brychtová. Their successor and the current owner of the Studio is the firm Lhotský, s.r.o., which is managed by Zdeněk Lhotský, a student of Libenský. A team of skilled glass technologists, cutters and mold makers realise world extraordinary projects and significantly sets new ways in glass design. Production of the Studio is focused on realization of large sculptures for artists and designers, architectural art glass and art works by Zdenek Lhotsky.

More about the Zdenek Lhotsky artwork you can find at www.zdenek-lhotsky.com

The History and Present of Lhotsky Studio

Fifty years ago, an array of art glass objects earned the admiration of hundreds of thousands of visitors to the Czechoslovak pavilion at the Expo ’58 world’s fair in Brussels. One such exhibit was a glass wall comprised of coloured glass blocs featuring animal motifs. The piece had been formed at the state enterprise Železnobrodské sklo by the creative team Jaroslava Brychtová and Stanislav Libenský. The modern, highly stylised work fashioned in the technique of mould-melted glass won the Grand Prix from the international jury. For the first time ever, the sculptress Brychtová and the painter Libenský showed the world that the glass-casting technology could also be used to render large-scale sculptures. Moreover, the award was a moral and artistic satisfaction for Professor Jaroslav Brychta, Jaroslava Brychtová’s father, who had begun experimenting with this glassmaking technique in the early 1940s, and also for the many glass workers and specialists, who, in later years, participated in the development of this technology at the technical-creative centre of Železnobrodské sklo. During the following decades, numerous remarkable small-sized and monumental works were created at the Pelechov centre by Libenský and Brychtová and subsequently by other artists as well, namely students of Professor Libenský at the Academy of Arts, Architecture and Design in Prague. The Pelechov moulded-glass sculpture production has indisputably contributed to the high ‘glass’ reputation of Czechoslovakia, the town of Železný Brod and the state enterprise Železnobrodské sklo.

The radical change of the political system following the Velvet Revolution of 1989 affected the organisation of the country’s glass industries. Considering the plant’s cast sculpture studio unprofitable, the new management of Železnobrodské sklo unscrupulously offered this ‘family silver’ for privatisation. Whether or not this was a well-judged decision is now besides the point. The enterprise gradually shed its plants and finally closed down altogether, but the Pelechov glass studio has succeeded in upholding and developing the tradition of mould-melted glass to this day. It is Zdeněk Lhotský in particular who deserves credit for this fortunate outcome. Purchasing the cast sculpture studio in 1994, Lhotský is now its owner, manager, technologist, art director and glass designer. While mastering some of these professions earlier, he had to learn the others through practice . In the 1970s, Lhotský attended the secondary glass training establishment in Světlá nad Sázavou, followed by his studies at the glass school in Železný Brod; in the 1980s, he graduated from the Academy of Arts, Architecture and Design in Prague, where he had been enrolled in the glass studio headed by Professor Libenský. Irrespective of his advanced skills in the field of glass, under the new circumstances much still needed to be verified, tested and innovated. Initially, Stanislav Libenský and Jaroslava Brychtová helped the studio in that they realised some of their architectural glass projects there . Although this was unquestionably an important experience and impetus for its further development, the studio, nevertheless, had to seek its own artistic expression and perspective. With other similarly specialised firms opening up in the region, this need became all the more pressing.

Zdeněk Lhotský is a multifaceted artist, whose creative pursuits, besides glass, include graphic art, sculpture, photography and music. Since his youth, he has been attracted to other fields of visual arts; for example, in 1987, he co-founded the art group Tvrdohlaví (The Stubborn Ones). Although these distinctive artists decided in 1992 to go their separate ways, their contacts have survived in various forms into the present. Worthy of praise is the fact that Zdeněk Lhotský offered some of them the opportunity to collaborate with him professionally, although they had had no previous experience with the glass medium. The artists Michal Gabriel, Stefan Milkov, Jaroslav Róna and Čestmír Suška, who are accustomed to working in a variety of art materials, imbued mould-melted glass sculpture with a novel concept, as did artists from other areas (Jiří Plieštik, Barbora Škorpilová, designers from the group Olgoj Chorchoj, the painter and sculptor Laco Teren from Slovakia, to name a few).Apart from the creative couple Stanislav Libenský–Jaroslava Brychtová mentioned earlier, the Pelechov studio has collabor ated with such highly individualistic glass artists as Ivan Mareš, Ladislav Oliva, Alena Matějková, Anna Matoušková–Kopecká, Oldřich Plíva and Markéta Šílená. The cast glass production of Lhotský’s studio has been enhanced by realisations executed for artists from abroad.Over the years, Lhotský has adapted the studio into a specialised technical and creative centre, where many unconventional and technically demanding designs have been implemented, including the work of Karen LaMonte, Howard Ben Tré, Brian Usher, Rebeca Huerta Viga, Peter Bremers and Kevin Berlin.

A special position in the studio’s artistic endeavours is held by Zdeněk Lhotský’s own work, that encompasses glass designs, mould-melted sculpture and architectural glass. Rather than being perceived as three unrelated areas, Lhotský’s aesthetic programme views them as a joint artistic challenge, as a quest for the specific possibilities arising from combining glass with space and space with glass. This includes the incorporation of glass designs in interiors, glass sculptures in public spaces or exhibition halls and monumental pieces in architecture. An active communication between the glass object and its setting and between the artist and the user or viewer is the leitmotif of Zdeněk Lhotský’s creations, irrespective of whether these are made of cast, slumped, fused or blown glass.

In 2004, the artist opened a series of exhibitions at the North Bohemian Museum in Liberec, which have been loosely continued in numerous cities of the Czech Republic and abroad. Each of these events are eloquent testimonies to the fact that within a relatively short period of the cast sculpture studio’s existence, Zdeněk Lhotský has contributed an important chapter not only to the annals of this unique field of glassmaking, but also to the modern history of the Czech visual arts in gener.